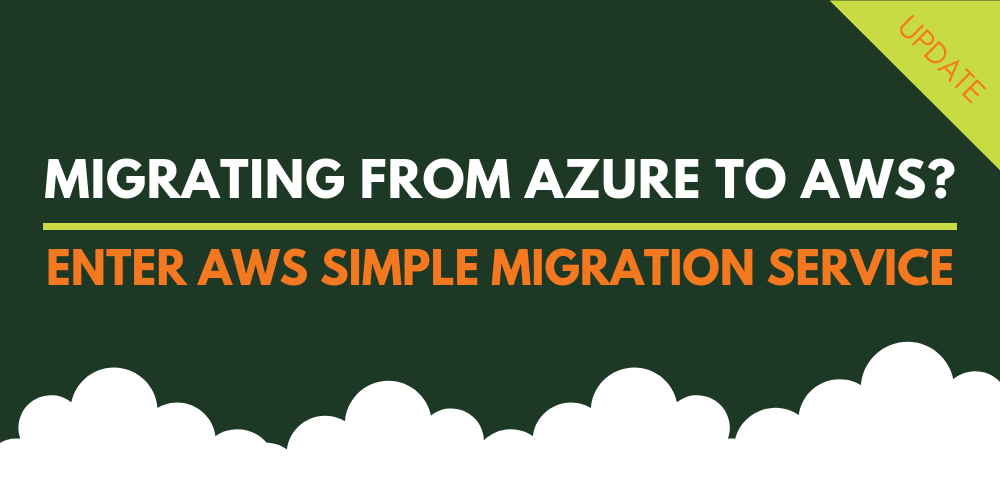 No matter how big or small your business may be, cloud migration is always a somewhat daunting task.

So whenever a new tool or update comes along that could make the move smoother, it’s welcomed with a few rounds of applause.

Last month saw AWS release a group of updates that extended its offering and increased the flexibility afforded to customers looking to migrate their VM workloads from Azure to AWS.

On April 18th, AWS announced that its Simple Migration Service (SMS) would now extend its support to cater for VMs migrating over from Azure to AWS, making taking your existing apps over to AWS cloud a more straightforward process.

Azure customers can forget about replicating individual servers and use SMS to move their VMs and apps over in one neat package.

This agentless service makes it easier than ever to automate, schedule, and track server migrations on a larger scale, cutting migration time and minimizing the risk for errors throughout the process.

Prospective customers moving their operations from Azure to AWS will be happy to learn that all the capabilities offered as part of its migration service come free of charge. You’ll only pay for the resources you use on other services like S3, EBS, and EC2.

On the hunt for top AWS talent? We make it easy.

Tell us what you’re looking for and we’ll put together a job spec that’ll attract professionals with the skills and experience you need.

The arrival of AWS SMS comes in response to Microsoft’s Azure Site Recovery tool, helping to bolster the vendor’s continuous efforts to not only maintain but expand its market share dominance over its main competitor.

Over the years, AWS has built a strong reputation for rapid internal development and rarely ever dips into the world of start-up acquisition, but the high-level disaster recovery and back up and migration tools over at CloudEndure were far too attractive an offer to pass on.

CloudEndure is able to address more complex migration scenarios than SMS, and is sold via SaaS subscription.

The race to expand migration capabilities isn’t exclusive to the two biggest names in the market; bringing up the rear in third place, Google Cloud Platform invested in its offerings with its 2018 acquisition of Velostrata, a start-up which had previously offered support for all three leading providers but now caters exclusively to Google Cloud.

The majority of enterprises today opt for a multi-cloud approach to migration.

The result? Leading providers have rolled out a huge range of products and services to facilitate that strategy, but that does make cost calculations a little more complex for customers looking to migrate—an issue compounded by the ever-growing range of stock keeping units (SKUs) available today.

An organization may want to migrate workloads from one cloud to another for any number of reasons, from superior contract terms to a weakened relationship with their current provider and beyond.

No matter what combination of vendors and products you go for, remember: taking your operations into the cloud is a complex technical process, but leaving one vendor to get on board with a new provider can be even harder from a commercial perspective.

Take cloud egress fees, for instance. These costs apply when you leave a provider and need to shift your data out of their systems, and can affect your decision when migrating in the first place or moving providers later on in the partnership.

Even if movement between Azure and AWS becomes freer commercially, that doesn’t guarantee parity across application programming interfaces (APIs).

Find out you should be paying for AWS professionals in your area.